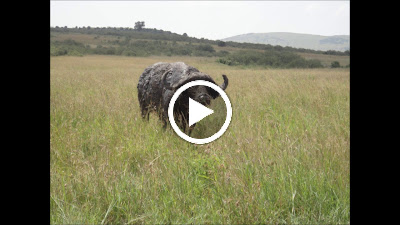 These guys are probably among the most exciting creatures nature ever provided.
They are built to withstand the most challenging environments in the world full
of predators and that's the African bush.

There is a reason why people came up with the word buffalo soldier.
If you ever watched predators in action like lions probably going after these
guys then am sure you know what am talking about.
They have probably killed more lions than any other creature in the wild
and on top of the list of most feared creatures by natives.

Their only downside is they have poor eyesight and unless there
is movement they depend on scent to pinpoint a threat.
From top to toe they are just pure muscle and even an adult cow can
easily flip a car.
Have always wondered why the cape buffalo probably runs slower when
being chased by a predator than when they are running after a threat.
They prefer to face a threat head on rather than run for their lives just like
a soldier.