Unless You're Allergic, You Can't Ignore Mushrooms! 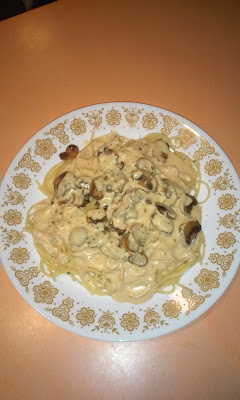 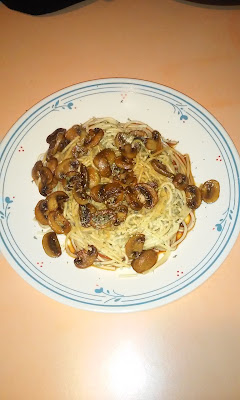 This recipe is so easy that you literally almost don't have to think at all while making it.

Really straight forward and as you can see I made it two different ways and first picture shows creamy mushrooms over spaghetti and the second one is mushrooms with a touch of soy sauce over spaghetti.

You don't need a lot of ingredients for either coz it's that simple so am not going to list,will just start with how I made it and for the first one you start by boiling however servings of spaghetti,then heat up a pan with a little bit of olive oil and take about 4ounces/per serving of half sliced mushrooms and drop them in the hot pan.Once the mushrooms turn sorta dark brown turn them over and do the same for the other side,it really should only take less than 10minutes to be done.

After the mushrooms are done,dish up your spaghetti and put the mushrooms on top,then take the same pan and add about 4ounces of water then add powdered creamer,then thicken it with either flour or cornstarch and if you want an even richer taste you could add parmesan cheese or use half n half instead,don't forget a touch of garlic,onion powder and salt.When the sauce is done,pour it over your dish then sprinkle some parsley over everything.

Now do I think this tastes really good,oh absolutely but if I wanted to stay on the healthy side,then I probably won't choose this one but go for the second option which pretty much you follow the same process except at the end instead of the creamy sauce,just add a touch of soy sauce on the mushrooms and put it over the spaghetti then sprinkle parsley flakes  on it.It's definitely less calories from the first choice and if you wanted to go a step further,you could always use whole grain pasta.

On a personal note I whole heartedly believe if you really want to eat healthy food,you just can't ignore Mushrooms,it has less than 20 calories per serving,you get vitamin D,about 300mg of potassium,zero cholesterol or sodium and depending on the kind of mushroom you get selenium which by the way if you don't get to eat salmon then mushrooms will give you that.Don't forget too that mushrooms also give you tryptophan which apparently is a crucial amino acid that the brain needs to make serotonin which melatonin also needs and am not a scientist so I can't tell you how the process works but what we know is we need melatonin for better sleep and serotonin is important in reducing stress or depression.If you're interested in learning more about that,I will let you do your research but what I know so far is I personally can't ignore mushrooms.

I love writing about wildlife and this might seem unrelated but personally I just don't think you can separate food from the wild and yes its easy nowadays to feel like food has no relationship with the wild due to the fact that almost every food goes through a lot of processing and we just simply walk into a store and buy it.

What we forget is even though there's the business side of it when it comes to food processing,I will bet you a nickel that almost all food still comes from nature and I don't know of much foods that are produced in a laboratory and I probably wouldn't care to eat it if I did.

A lot of foods might still get discovered in some forest somewhere with so many of what our bodies need nutritionally and if you think about it,mushrooms once probably looked like some useless fungus out there and now it turns out to be one of the best foods you can have.

There was once a time when people collected food from nature and appreciated the land or sea that gave it to them.

I hope one day we care enough to protect our wildlife before everything slips away.

The thing I love about this powdered creamer is you can use it to make creamy tasty sauces just by boiling some water and adding it,then thickening it and seasoning with salt,garlic and onion powder or wherever choice of spices or adding any cheese of choice to make either alfredo sauce or any other cheesy sauce.