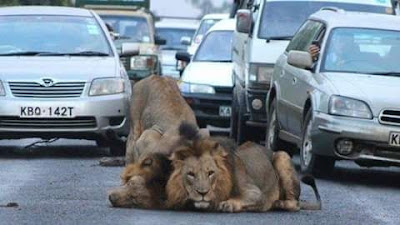 So for those that don't know Nairobi,it's the capital city of Kenya in east Africa with a population of more than 3million people and just to give you a rough idea of how that looks like its about 4times the population of Seattle and so it really is a very busy atmosphere people wise.

Kenya generally has more than 35 national parks and reserves,but what makes it even better is it happens to be probably the only capital city in the world with a national park in it and obviously fenced.

Before you enter Nairobi national park,they have an animal orphanage,might sort of look like an advanced zoo but it's completely different because the main purpose of it is to save some orphaned animals around the country especially endangered species and some of them end up getting integrated back to the wild either in Nairobi national park or other parks around the country.

Unfortunately there's been a few cases and this obviously happening now,where lions find a way to escape the park,don't know how they did it with an electric fence but obviously the two adult males figured it out.Originally the Kenyan wildlife service reported that a female with cubs and two other lions did escape as well but two of them came back to the park and the female with cubs didn't go too far as she was nursing and was recaptured.What makes this story so interesting in my opinion is this has been probably the longest period in which the two apparently male lions just disappear out of sight from the wildlife authorities yet somehow they end up chilling in the middle of a busy highway like in the photo taken above then shortly after disappearing into thin air and authorities as of now still can't locate them!
Email ThisBlogThis!Share to TwitterShare to FacebookShare to Pinterest
Labels: Lion
Newer Post Older Post Home