Kenya Sets Ablaze Over 105 Tonnes of Ivory and Rhino Horns! 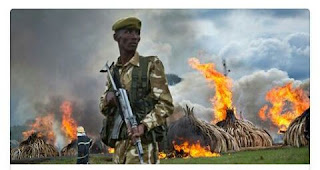 Over $170 million dollars of illicit wildlife goods set ablaze by the Kenyan government in an effort to convey a strong message against poaching.

South Africa is making an effort to legalize this trade and maybe the idea is sort of like marijuana in Colorado am not sure, I think it's more like if you legalize it then there would be less value for trading it illegally and might not be financially viable for illegal dealers to keep going.

I love animals and am open to ideas that would actually solve this crisis and maybe South Africa's idea would work and maybe not but anything at this point is worth trying because what's not declining is the number of elephants and rhinos lost each day and as a matter of fact it's increased substantially.

So what's the solution and it's not elephants or rhinos only but in case you didn't know the pangolin has a lot of demand in Asia as well and poachers aren't discriminating and probably many more wildlife are at risk of extinction!

Do I think it's a good idea to burn the largest stockpile of these illegal wildlife goods ever burnt in history, no I don't think so and I completely disagree that it would solve the core problem as far as poaching.

The demand for ivory is going up regardless and to burn it is just likely to increase the prices even more and just to give you an example, there was a time when we heard in the news when some oil production facilities burnt in the middle east and what happened after that, oil prices skyrocketed.
The same thing is likely to happen here and the publicity of it as well could go either way and probably benefit the illegal trade as well as they realize the scarcity of it, most likely boosting the prices.

Kenya has burnt an enormous amount of ivory and rhino horns over the years starting in 1989 and has it solved the problem, unfortunately not and repeat of the same thing to expect a different result doesn't work on this planet, maybe on a different planet.

Some people might argue sell it and use the money to protect what's left and that sounds like a good idea but it can't be done as most nations including Kenya have signed an agreement not to do so and not only that but also corruption might get in the way of making that a success.

So my personal opinion just keeps it in a public museum and have government and independent overseers that publicly keep track of the goods and update it and even put the records on government websites.

Why I think this is a better idea which isn't perfect but there will come a time when the wild has no more elephants and rhinos and unfortunately it's going to happen if this trend keeps up. It will be impossible to keep carcasses in a museum but of course much more sensible to keep the ivory and rhino horns as a constant reminder of the magnitude of wonderful wildlife lost and probably much more effective to future generations and burning them I think will be such a short-term memory that I doubt in two weeks anyone would remember this story, sadly!